Ihling et al (opens new window) from Martin Luther University Halle-Wittenberg (Halle, Germany) have published a protein MS-based ‘proof-of-principle’ method to detect SARS-CoV-2 virus proteins from gargle samples from COVID-19 patients. Their protocol consists of an acetone precipitation step, followed by tryptic digestion of gargle solution proteins, (see here),followed by targeted MS analysis on an Orbitrap Fusion Tribrid mass spectrometer with nano-ESI source (Thermo Fisher Scientific). In the original manuscript, the authors detect peptides from SARS-CoV-2 virus proteins and present evidence for their spectral annotation. This study is an initiative in developing a routine MS-based diagnostic method for COVID-19 patients. This MS data was submitted in May 2020 as PXD019423 (opens new window) on the ProteomeXchange Repository.

We were interested in exploring the possibility of presence of microorganisms in the samples from the original manuscript. For this, Peter Thuy-Boun (Wolan Lab, Scripps Institute) searched the three RAW files using COMPIL 2.0 against a comprehensive 113 million protein sequences and roughly 4.8 billion unique tryptic peptide sequences database library. We used a Galaxy workflow to generate a list of peptides detected using COMPIL 2.0 (opens new window) search. The peptides were subjected to [Unipept analysis] (https://unipept.ugent.be/datasets) using ‘Advanced Missed Cleavage Handling” option to generate outputs with taxonomic and functional information. We selected a list of species (identified with atleast two peptides) for the metaproteomics search and validation workflow based on whether they were reported - or had the potential to be present in human samples. We used this list of species along with RAW files and COVID-19 protein database as inputs for a Galaxy workflow to -> 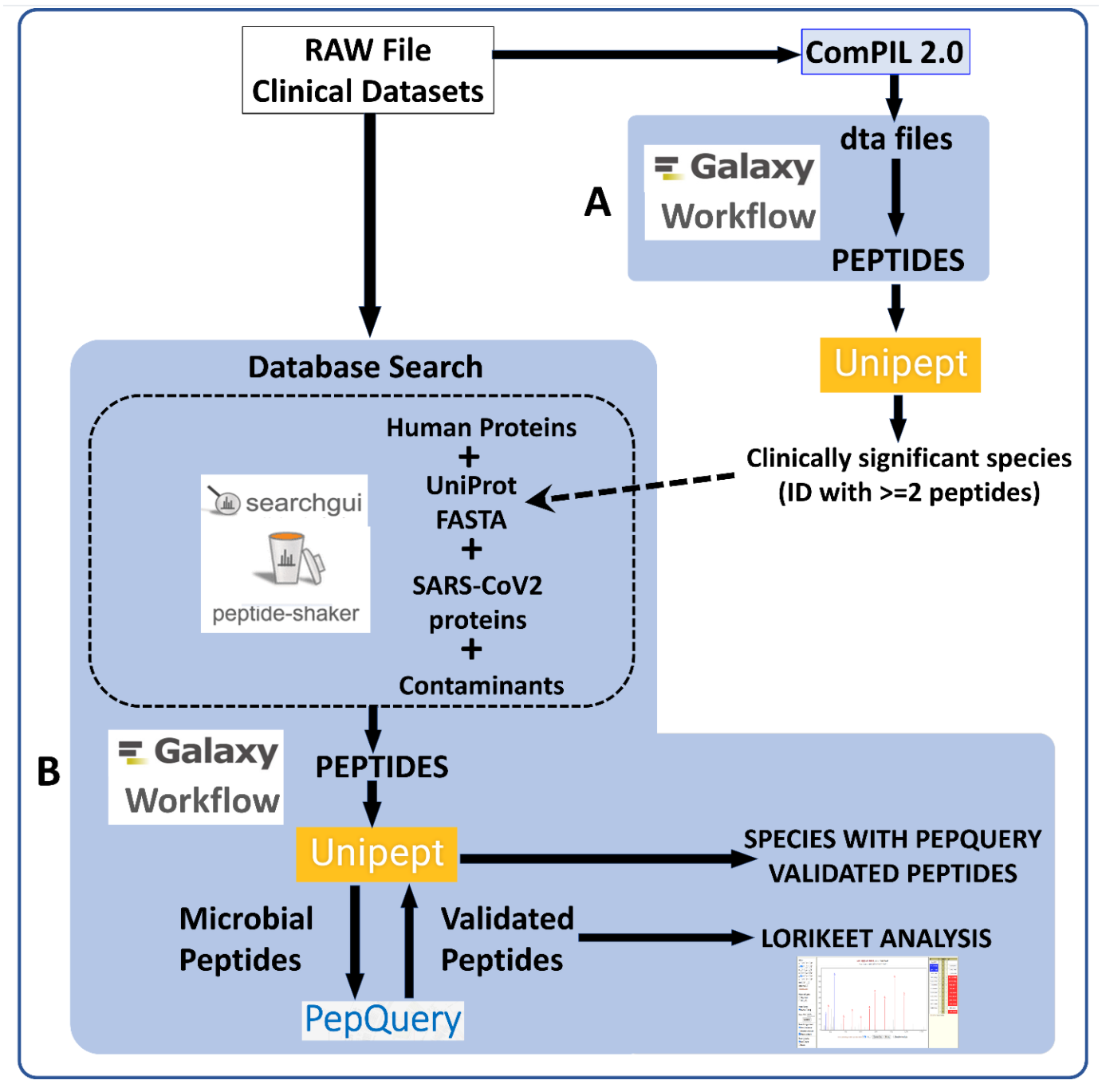 RAW Files from clinical datasets were searched against a comprehensive UniRef database using COMPIL Peptides detected from COMPIL 2.0 search were extracted using a Galaxy workflow (A) to extract peptides that were subjected to Unipept analysis. Clinically important species (detected with at least two peptides) were used to generate the UniProt database. The RAW files were re-interrogated against a combined database of human proteins, UniProt database of detected species, SARS-CoV-2 proteins and contaminants using SearchGUI/PeptideShaker within a Metaproteomics Search and Validation Workflow (B in figure above and details in figure below). 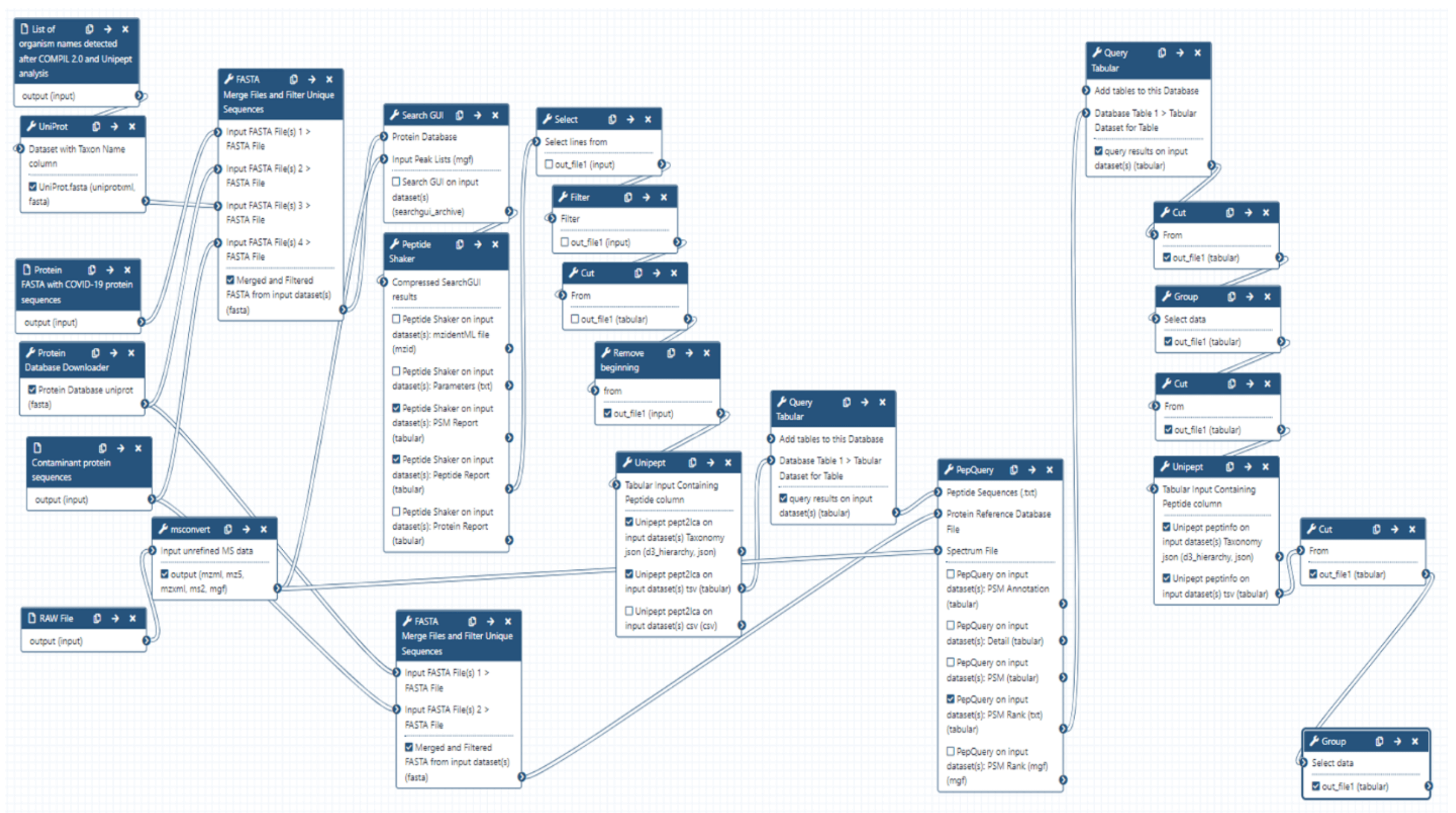 The analysis of the gargling solutions using COMPIL 2.0 and Unipept (both outside of Galaxy) and using SearchGUI/PeptideShaker, Unipept and PepQuery (all within Galaxy workflows) resulted in detection of Streptococcus pneumoniae (an opportunistic pathogen) and Lactobacillus rhamnosus (a component of probiotic treatment). In the published letter to the editor, we only report bacteria which were identified with at least two peptides per dataset. All the files associated with this analysis is available via https://covid19.galaxyproject.org/proteomics/.

Streptococcus pneumoniae is a commensal microorganism that colonizes the upper respiratory tract in healthy individuals. However, in susceptible individuals with weaker immune systems, such as the elderly, the bacterium may become pathogenic and spread to other locations to cause disease. Clinical studies have started identifying possible co-infecting bacteria in COVID-19 (opens new window) patients. Amongst these S. pneumoniae has been shown to be the most common (opens new window), is known to be nosocomial, detected in immuno-compromised patients and are difficult to treat because of its multi-drug resistance. As a last step, all the peptides, confidently identified by SearchGUI/PeptideShaker, confirmed by PepQuery were subjected to Lorikeet analysis. Below is Lorikeet visualization of two peptides from S. pneumoniae and each PSM has metrics for spectrum, charge state, total ion current, OMSSA, MS-GF+ and X! Tandem identification statistics, PeptideShaker PSM score and confidence along with PepQuery-generated score, p-value, confidence and Lorikeet and Unipept metrics.

Lactobacillus rhamnosus is one of the most studied probiotic (opens new window) bacterium, used in prevention of oral candidiasis (opens new window) infections. Since no clinical history is available for the COVID-19 patient (RAW 02), we can only speculate that the presence of this bacterium due to oral prebiotic treatment during hospitalization. Below is Lorikeet visualization of two peptides from L. rhamnosus and each PSM has metrics for spectrum, charge state, total ion current, OMSSA, MS-GF+ and X! Tandem identification statistics, PeptideShaker PSM score and confidence along with PepQuery-generated score, p-value, confidence and Lorikeet and Unipept metrics.

Two of the datasets from this study could also detect SARS-CoV-2 peptides, while the third one could not detect SARS-CoV-2 peptides in the original study or in our reanalysis. Below is Lorikeet visualization of two peptides from SARS-CoV-2 and each PSM has metrics for spectrum, charge state, total ion current, OMSSA, MS-GF+ and X! Tandem identification statistics, PeptideShaker PSM score and confidence along with PepQuery-generated score, p-value, confidence and Lorikeet and Unipept metrics.

We have contacted the authors of the original manuscript and reported our findings and have discussed the possibility of using new gargling solutions samples to detect the presence of any cohabitating emerging pathogens in COVID-19 patients using mass spectrometry based metaproteomics analysis.