The absolute majority of SARS-COV-2 data is in the form of assembled genomic sequences. This is unfortunate because any variation that exists within individual samples is obliterated--converted to the most frequent base--during the assembly process. However, knowing underlying evolutionary dynamics is critical for tracing evolution of the virus as it allows identification of genomic regions under different selective regimes and understanding of its population parameters.

In this analysis we check for new data, run single- or paired-end analysis workflows, aggregate the results, combine them with the list produced in the previous days, and finally analyze the complete, up-to-date set of variants using Jupyter. Here is a brief outline with links:

Raw sequencing reads are required to detection of within-sample sequence variants. We update the list of available data daily using the following logic implemented in fetch_sra_acc.sh:

# How do we call variants?

This section provides background of how we settled on using lofreq as the principal variant caller for this project.

# Calling variants in haploid mixtures is not standardized

The development of modern genomic tools and formats have been driven by large collaborative initiatives such as 1,000 Genomes, GTEx and others. As a result the majority of current variant callers have been originally designed for diploid genomes of human or model organisms where discrete allele frequencies are expected. Bacterial and viral samples are fundamentally different. They are represented by mixtures of multiple haploid genomes where the frequencies of individual variants are continuous. This renders many existing variant calling tools unsuitable for microbial and viral studies unless one is looking for fixed variants. However, recent advances in cancer genomics have prompted developments of somatic variant calling approaches that do not require normal ploidy assumptions and can be used for analysis of samples with chromosomal malformations or circulating tumor cells. The latter situation is essentially identical to viral or bacterial resequencing scenarios. As a result of these developments the current set of variant callers appropriate for microbial studies includes updated versions of “legacy” tools (FreeBayes (opens new window) and mutect2 (a part of GATK (opens new window)) as well as dedicated packages (Breseq (opens new window), SNVer (opens new window), and lofreq (opens new window)). To assess the applicability of these tools we first considered factors related to their long-term sustainability, such as the health of the codebase as indicated by the number of code commits, contributors and releases as well as the number of citations. After initial testing we settled on three callers: FreeBayes, mutect2, and lofreq (Breseq’s new “polymorphism mode” has been in experimental state at the time of testing. SNVer is no longer actively maintained). FreeBayes contains a mode specifically designed for finding sites with continuous allele frequencies; Mutect2 features a so called mitochondrial mode, and lofreq was specifically designed for microbial sequence analysis.

Our goal was to identify variants in mixtures of multiple haplotypes sequenced at very high coverage. Such dataset are typical in modern bacterial and viral genomic studies. In addition, we are seeking to be able to detect variants with frequencies around the NGS detection threshold of ~ 1% (Salk et al. 2018 (opens new window)). In order to achieve this goal we selected a test dataset, which is distinct from data used in recent method comparisons (Bush et al. 2019 (opens new window); Yoshimura et al. 2019 (opens new window)). These data originate from a duplex sequencing experiment recently performed by our group (Mei et al. 2019 (opens new window)). In this dataset a population of E. coli cells transformed with pBR322 plasmid is maintained in a turbidostat culture for an extensive period of time. Adaptive changes accumulated within the plasmid are then revealed with duplex sequencing (Schmitt et al. 2012 (opens new window)). Duplex sequencing allows identification of variants at very low frequencies. This is achieved by first tagging both ends of DNA fragments to be sequenced with unique barcodes and subjecting them to paired-end sequencing. After sequencing read pairs containing identical barcodes are assembled into families. This procedure allows to reliably separate errors introduced during library preparation and/or sequencing (present in some but not all members of a read family) from true variants (present in all members of a read family derived from both strands).

For the following analysis we selected two data points from Mei et al. 2019 (opens new window): one corresponding to the beginning of the experiment (s0) and the other to the end (s5). The first sample is expected to be nearly clonal with no variation, while the latter contains a number of adaptive changes with frequencies around 1%. We aligned duplex consensus sequences (DCS) against the pBR322. We then walked through read alignments to produce counts of non-reference bases at each position (Fig. 1). 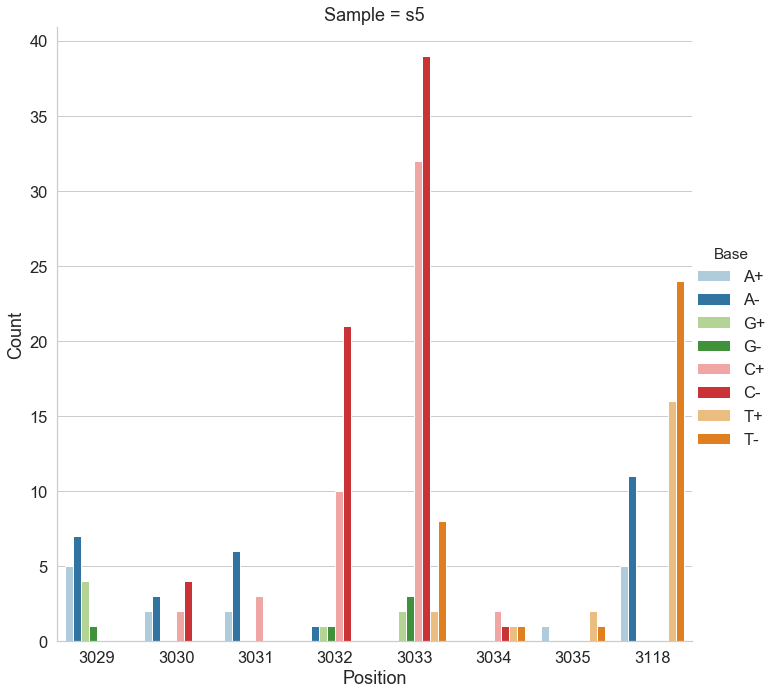 Because all differences identified this way are derived from DCS reads they are a reasonable approximation for a “true” set of variants. s0 and s5 contained 38 and 78 variable sites with at least two alternative counts, respectively (among 4,361 bases on pBR322) of which 27 were shared. We then turned our attention to the set of sites that were determined by Mei et al. to be under positive selection (sites 3,029, 3,030, 3,031, 3,032, 3,033, 3,034, 3,035, 3,118). Changes at these sites increase the number of plasmid genomes per cell. Sample s0 does not contain alternative bases at any of these sites. Results of the application of the three variant callers with different parameter settings (shown in Table 2) are summarized in Fig. 2. 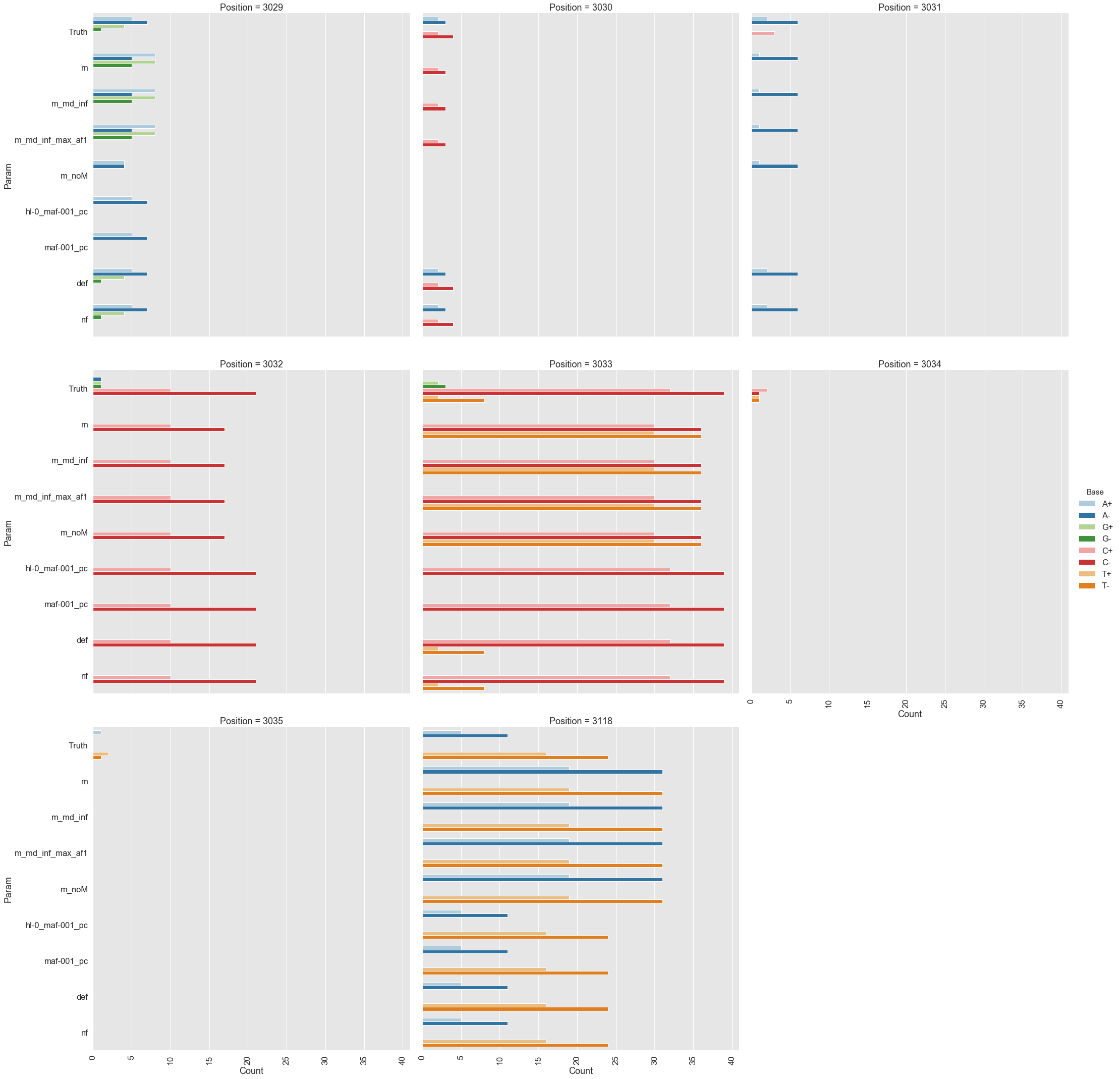 Figure 2. Calls made by mutect2, freebayes, and lofreq. For explanation of x-axis labels see Table 2.

The lofreq performed the best followed by mutect2 and FreeBayes (contrast "Truth" with "nf" and "def" in Fig. 2). The main disadvantage of mutect2 is in its handling of multiallelic sites (e.g., 3,033 and 3,118) where multiple alternative bases exist. At these sites mutect2 outputs alternative counts for only one of the variants (the one with highest counts; this is why at site 3,118 A and T counts are identical). Given these results we decided to use lofreq for the main analysis of the data.

lofreq is used in two galaxy workflows described in this section. Illumina data currently available for SARS-CoV-2 consists of paired- and single-end datasets. We use two similar yet distinct workflows to analysis these datasets. 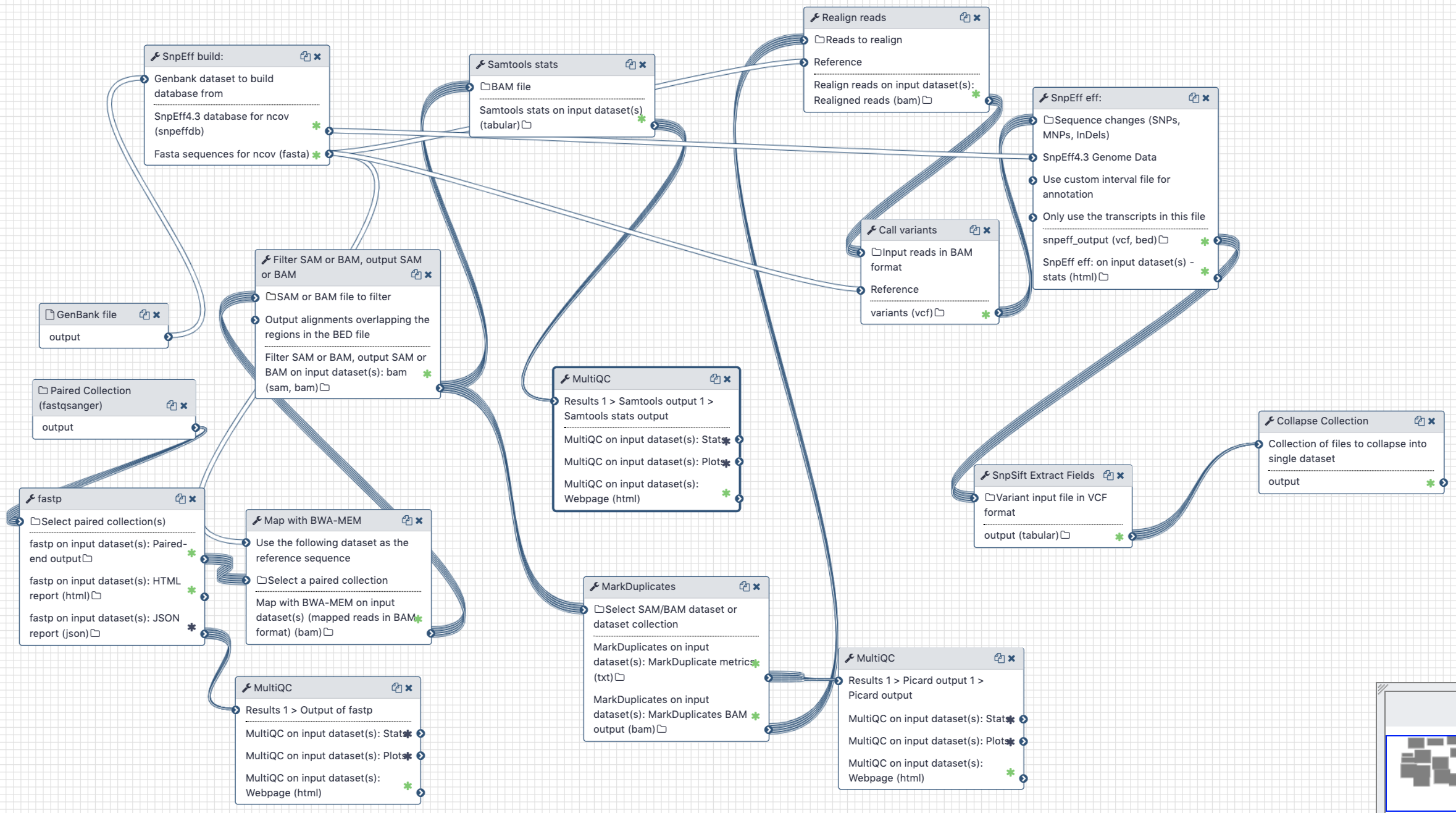 Figure 3. Workflow for the analysis of paired-end Illumina reads

A tab-delimited table of variants described in Table 2 below.

Figure 4. Workflow for the analysis of single-end Illumina reads < 100 bp

After running both workflows the data is combined into a single dataset (variant_list.tsv and smaller dataset filtered at alternative allele frequency of 5% and above variant_list.05.tsv).

These result datasets have the following structure:

(opens new window). The notebook is used to produce summaries such as distribution of variants across the SARS-CoV-2 genome:

The variants we identified were distributed across the SARS-CoV-2 genome in the following way:

Figure 5. Distribution of variants across the viral genome.

Galaxy histories corresponding to all analyses performed so far are listed in Table 1. The history used for aggregating results and launching jupyter notebook is here →